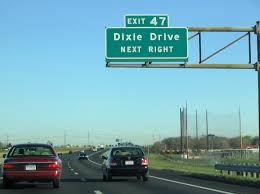 Yesterday I saw an article from the Dayton Daily News, talking about plans for a congested area in West Carrollton. One of those plans for the “Miami Bend” is building a 4,000 seat event arena, which come become the Dayton Gems’ new home.

If you aren’t familiar with this area, here’s a map. This area is crowded with buildings and roads, including one former Roberds store (if you’re old enough to remember the store itself, those blue Roberds vans, the commercials, and Channel 2 being sponsored by Roberds. Here’s what happened to the retailer.) Case in point: there’s not a lot of room for building something from the ground up.

But hold on, there’s a big construction project going on as we speak, as we’ll soon have access to both North and South Interstate 75 from one road instead of the tangled mess we have today. So building the area up makes sense. The shopping center next to I-75 has been dead for awhile, with only the DMV and possibly the nightclub still there. The old Roberds building turned into a flea market, or rather a “Mall without Walls.”

The first thing I thought of was “Why not the Old Roberds?” Granted, you would probably need to move the flea market somewhere else, but I think the building would be big enough, or close to enough, to hold an ice rink. The flea market could then move to the old Administrations Building right next door, across from Crossway Road. The only problem would be parking for the market, and you can bring up the same problem with the Old Roberds building.

There’s always an option to demolish the plaza itself, but then you have to move the other businesses still occupying the space. You still have the issue of parking if you do that though.

I also thought of the old GM plant in Moraine to build that area up, since there’s plenty of space there. However, I think that area has been sold to a company and they’re going to do something with the area (I hope they do, anyways.) I heard that they were going to make flying cars there, but that was a year ago. This is irrelevant.

The Administrations Building next door wouldn’t be a good spot, mainly because the building is smaller and parking is a bit tight. Even with bulldozing and reformatting, you still have that trouble unless you blocked off the road and turned that into parking.

In that area, I can’t really think of anywhere else to put an arena in. Like I previously said, that area is packed with buildings and concrete.

Hotels, a whitewater park, and the event center are being studied by a Nebraska company and the people will know its fate in the First Quarter of 2012.

Issues aside, this would be a nice boost for the West Carrollton/Moraine area. The Dayton Dutch Lions are moving into West Carrollton for the 2012 season, so we could possibly see another team with the Dayton crest call West Carrollton home. Just think, an area hit by job losses and factories/stores calling it quits, could be getting sports to get the people in. Let’s see where it goes from here.

Source of information from the Dayton Daily News and the Cincinnati Enquirer.